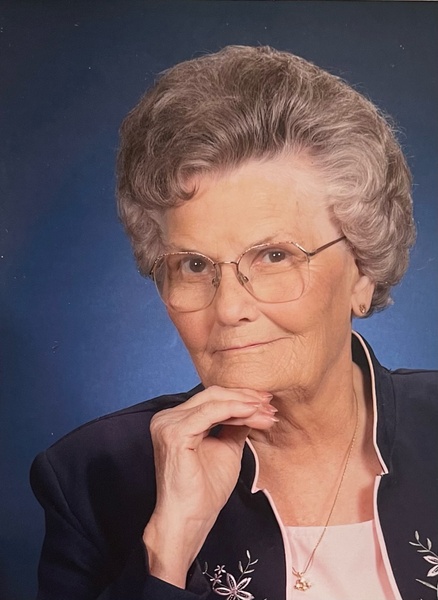 Velma Inman Rowlett went to her heavenly home on Friday, July 29, 2022, at the age of 94 years three months, and two days. She was born on April 27, 1928, to Levi Alvin Rogers and Gladys Marie (Maxwell) Rogers in Portales, New Mexico.

Visitation is scheduled from 5:00 PM to 7:00 PM Monday, August 1, 2022, at Denton-Wood Funeral Home Chapel. A funeral service is scheduled for 10:00 AM Tuesday, August 2, 2022, at First Baptist Church with Pastor Barry Callahan and Pastor Howell Scott officiating. Interment will be at the Carlsbad Cemetery in Carlsbad, NM. Denton-Wood Funeral Home is in charge of arrangements.

Velma graduated from Portales High School, Portales, NM in 1946. She completed the Eddy County Beauty School as a licensed cosmetologist in 1960.

Velma married Woodson Lee “Woody” Inman on April 4, 1947, in Portales, NM. They started a family together and had four children: Gary, Marilyn, Ginger, and Larry. Velma and Woody were just four months shy of their 60th wedding anniversary when he passed on December 6, 2006. Velma married Ray Rowlett on July 20, 2010, and he passed in April of 2015. With Ray, Velma gained three step children: John, Jim, and Donna.

Velma was a member of First Baptist Church for the last several years, but most of her membership was at Hillcrest Baptist and Blodgett Street Baptist. She served many years teaching Sunday School, she was active in the Women’s Missionary Union, and Reflections Senior Adult Choir and the Senior Adult Sunday School at FBC.

Velma was an avid baker and her delicious baked goods and candies were enjoyed by everyone she knew. She often had to bake two German chocolate cakes, one for each son to stop their arguing over who got to take it home. She made the wedding cakes for both daughters’ weddings and for her granddaughter, April. Her great niece, Julie, described her perfectly: “She was good at everything. Looked beautiful everyday and made you feel loved like warm corn bread, ice-cold Pepsi and pink stuff at Thanksgiving. She was feisty and rolled her eyes like no one else.”

She loved sewing, embroidery, crochet, quilting, and playing Yahtzee. She enjoyed lots of board games and whenever family was gathered hours were spent in playing the different games. She was also a long-term member of Woodmen of the World.

Velma provided many giggle moments to her family and friends. Often mispronouncing, confusing words in trying to explain anything. Examples as follows: She often complained of having information of the knee. She owned an adenoid phone. She told her friends that her daughter taught yogurt. When checking out at Furr’s cafeteria she loudly announced “two sinners” – they laughed and said “two seniors”. Correct description either way.

When babysitting her grandchildren, she was doing the Jack LaLanne exercise program on TV. When she would have to jump, bounce, etc., she would secure her bosom with her hands. Then, she turned around and saw that her grandchildren were doing the same and she asked them why, and they replied, we’re just watching you. (Little ones don’t miss anything.)

Whenever the family gathered for holidays, birthdays, reunions, etc., Velma (Mema) could also be found sleeping on the living room floor on a pallet with all of her grandchildren. The only time the grandbabies weren’t climbing all over her was when Papa Woody took them all for ice cream.

The family wants to express their extreme gratitude for the love and care given to Velma while she was a resident at Goodlife. Everyone associated with Goodlife and Enhabit Hospice were amazing and the family I s so very grateful for each of them.

And, heartfelt thanks and love to Robin Fawcett who faithfully went to Goodlife each week to do Mom’s hair. She and Mom had a long-term friendship and hair repair relationship.

To order memorial trees or send flowers to the family in memory of Velma Inman Rowlett, please visit our flower store.