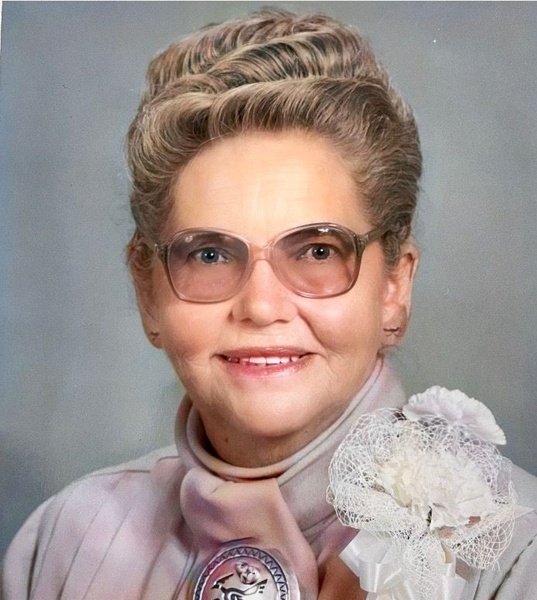 Vana Dare Lowe, passed away peacefully on January 7, 2022. She lived to be 97 years old, seven months and three days. This was important to her, as she considered every day a gift from God.

Vana was born in High Rolls, New Mexico on June 4, 1924. Her parents were James and Mary Shults and was the youngest of 8 children: six sisters and one brother. She married Harding Edison Bolling on July 4, 1942. To which this union a son was born on April 29, 1943. Tragically, on July 5, 1943, Technical Sergeant, Harding E. Bolling died in a car accident on his way to report to West Point where he was to be an instructor. This had made Vana a bride, a mother, and a widow within a year and one day.
Vana was asked to meet Technical Sergeant, Floyd L. "Buck" Challstrom that was stationed at the base she worked at. After their blind date and courting's on November 1, 1944, they married. Early, in their marriage he adopted Harding. Their son, Harding was married to Doren Gordon on August 13, 1965. Vana's granddaughter, Marlo was born on May 26, 1970. Her first grandchild was greeted with excitement and made their family complete. Unfortunately, her son, Harding Challstrom preceded her in death on December 13, 1977 due to complications from Diabetes and after almost 48 years of marriage, Buck preceded her in death on May 14, 1992 due to Alzheimer's.
After Floyd's death several repairs were needed on her home and a gentleman from church came to help. As a form of repayment, she baked him a cherry pie. For Bud it was love at first “bite". On November 15, 1992, she married James H. "Bud" Lowe and with this union she inherited an additional family that included stepdaughter Cheryl, and Bud's four grandchildren. Bud preceded her in death on September 22, 2018.
Vana was also preceded in death by her parents, James and Mary Shults and her siblings, Mildred (sister), Jimmie (sister), Damon (brother), Mary (sister), Bessie (sister) and Doris (sister) who was also a twin, but the other twin had died at seven days old.
Vana was one of the sweetest, caring, and kindest people you would ever meet. She enjoyed reading her books and daily devotionals in which she said was one of the keys to keeping her mind sharp. She also enjoyed helping others and playing bingo when she could.
Those who remain to mourn Vana's death are her granddaughter, Marlo Challstrom Alcala, and partner Mark Nelms. Great grandson's Danny Alcala (Haleigh) and Nicholas Alcala (Angel). Along w/her great great grandchildren, Grant, Rylan, Ariana, Sutton, Teagan, Alayna, and Kason.
Her stepdaughter Cheryl Caraway and husband John. Bud's grandchildren, John Ross (Stephanie) Caraway, Katy Caraway (John) and Cindy Lee Applebaum (Marty). Bud's great grandchildren Truitt, London, Carter, Joseph, and Paul. She was preceded in death by Bud's grandson Dean Lewis.
She also leaves behind several nephews and nieces.
A memorial service is scheduled for Saturday, Jan. 22, 2022 at 3:30 pm at the First Baptist Church Carlsbad, NM. Masks are required. Vana loved flowers but it was her wishes that any memorials be made to a charity that promoted children or animal welfare. She also held the Gedeon's mission close to her heart.
Services are being handled by Denton-Wood Funeral Home.

To order memorial trees or send flowers to the family in memory of Vana Dare Lowe, please visit our flower store.