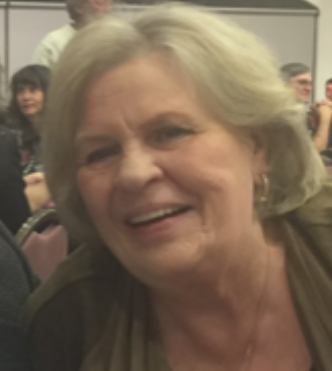 On the glad morning of March 7th, Sherry Bowman flew away to a home on God's celestial shore.  Sherry was born in Artesia NM, October 1, 1947 to Victor Clack and Melba (Hale) Clack. She was raised in Artesia and attended school there. She was a devoted Bulldog fan till the end. She was the one in orange when her sons played Caveman Football and when her daughter cheered for the hometown Cavemen.  Always a Bulldog at heart.

Sherry met her husband Pat, of 55 years in Artesia at Thompson's department store where Pat sold shoes.  They flirted with each other until she ended up with umpteen pairs of shoes and a forever partner.  They married at St. Edwards church in 1965 and made their first home in Lovington, then moved to Carlsbad. Then the children came...Stacy, Jeff and Jill.  Pat and Sherry raised their little ones with a work ethic that is rare in this day and time and proudly continues in the family.

Sherry as one of the very first two women to break into a male dominated field, the potash industry.  She began working at SW Potash, which later became AMAX as a warehouse clerk, then became the purchasing agent.  She held this vital role in the community for 22 years.

Sherry loved learning.  She attended NMSU-C and obtained associate degrees in Accounting and Business.  She taught church classes that are remembered by past students even today.

In 1984, she co-founded Bowman Maintenance with her husband which served the oil and gas industry providing mechanic and foundation services in many of the 50 states in various gas plants and refineries.

She was a quilter extraordinaire and seamstress unrivaled. In continuing her love for learning, she was always crafting the newest craft project to come along. She purchased Jill's Fabric and Design in 1993, named for her daughter Jill. They provide Carlsbad and surrounding areas with beautiful fabrics and notions dedicated the beauty of handmade art and imagination. It must be said that Sherry's talents included concert piano along with the Cello. One of her favorite pastimes was family dinners or events especially when her brother Rusty would play the guitar and her brother in-law Danny would play the fiddle.  Her mother and others would harmonize old Baptist hymns and popular songs heard on the radio, she was a lady of many talents and attributes. But the most evident was her love for her children and grandchildren and great grandchildren.  She always told them, "There's no one better than you, but remember, you're no better than anyone else."  This was the same 'Bama" that would help with algebra when their parents couldn't, or would spoil them with anything they desired. I don't think she ever said no to them. That love was shown at her favorite times, the holidays. She would make costumes and treats and simply loved Halloween.  Christmas was always extreme!  If you've ever seen her home decorated and flooded with presents you can't forget the site.

Being married to the oldest Bowman in a family of 9 children, Sherry became the matriarch to this large group.  They showed her love and respect on this role.

Sherry's love for family is fierce. She showed us all how to protect each other.  Her children would each lay down his or her life for one another.  She was, and is proud of her children and their accomplishments in life.  She showed strength and pride in her demeanor.  Her grandchildren carry this trait today.

Sherry is preceded in death by her parents, Victor and Melba Clack, sister, Patty Fuller, and grand daughter, Chelsea Bowman.

Along with 12 great grandchildren and numerous nephews and nieces each special to her heart.

Pat and Sherry loved and cared for many others who shared the dinner table, a place to lay weary heads and hearts. They are called Mom and Dad by so many that needed stability or a shoulder to lean on.

This isn't goodbye, but a temporary separation.  Thank you for your love and examples to all of us.  We'll love you forever.

Funeral services will be held Friday morning, March 11th at St Edwards church. Beginning with a rosary service at 9:30 to be followed by funeral services at 10:00. Burial will follow at Carlsbad Cemetery.

To order memorial trees or send flowers to the family in memory of Sherry Bowman, please visit our flower store.