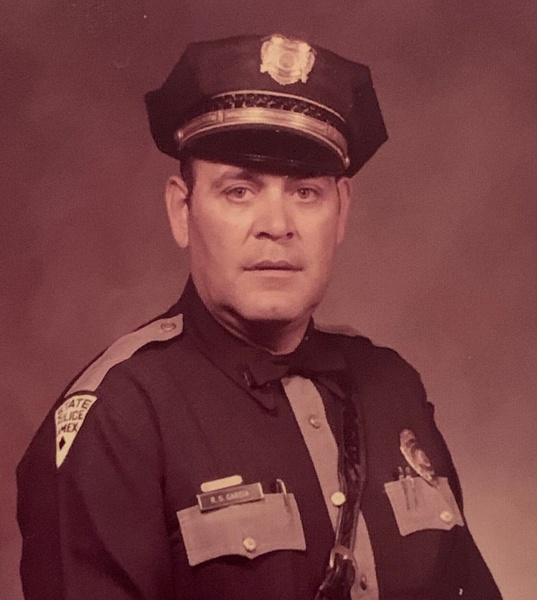 Services will be livestreamed and may be viewed by clicking here: Blodgett Street Baptist Church | Facebook

Roque was born August 16, 1931 to Pedro and Josephine (Sanchez) Garcia. He attended school in Roswell. Roque served his country in the U.S. Army during Korea. He married Ellen Smith, the love of his life, September 17, 1960 in Artesia, NM. Roque began his law enforcement career working for Roswell City Police for three years and Artesia City Police for one year. Roque and Ellen then moved to Carlsbad in 1960 and he went to work for the NM State Police where he worked 25 years. He was awarded New Mexico State Policeman of the Year in 1974 and worked the prison riot in 1980. Roque instructed defensive driving for 17 years and was on the burial detail for the state police. After retirement, he worked with the National Parks as a seasonal park ranger for 14 years. Roque also worked with the detention center as a transport officer, transporting inmates until 2008. He was a member of Blodgett Street Baptist Church since 1974. Roque will be deeply missed by his family, many friends and colleagues from the NM State Police, National Parks Service and Eddy County Detention Center. He was preceded in death by his parents; wife, Ellen Garcia; great-grandson, Jordan Davis; son-in-law, Joe Davis; sisters: Eleanor Garcia, Juanita Loya, Della Lopez; brothers: Richard and Danny Garcia.
Survivors are his daughters: Ruth Davis of Carlsbad and Roxann Reddy and husband, Paul of Lubbock, Texas; grandson, Jason Davis and wife, Alicia of Carlsbad; granddaughter, Brittany Simpkins and fiancé, Lee Lipscomb of Lubbock, Texas; great-grandchildren: Kori Davis, James Davis and Ansley Simpkins; siblings: Henry Garcia and wife, Bertha of Alamogordo, NM, Frances Fierro and husband, Louie of Roswell, NM, Orlando Garcia of Los Angeles, California and numerous nieces and nephews.
Pallbearers will be the New Mexico State Police Department. Condolences may be expressed at dentonwood.com

To order memorial trees or send flowers to the family in memory of Roque S. Garcia, please visit our flower store.
Send a Sympathy Card