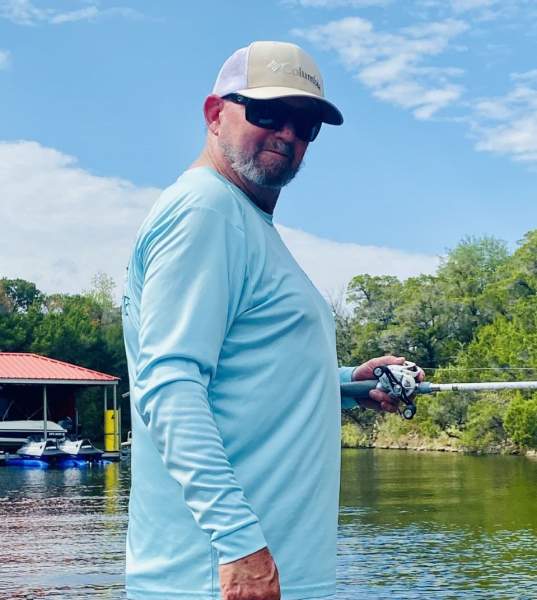 Robert Karl Rhoades (“Robo”) passed away peacefully at home Thursday, April 8, 2021 surrounded by the love of his life, Pam, and all of his children and grandchildren. A viewing will be held Tuesday, April 13, 2021 from 5:00-7:00 PM at Denton-Wood Funeral Home. A celebration of his life will be hosted by his family on Wednesday, April 14, 2021 at First Assembly of God in Carlsbad at 11:00 AM. Service capacity will be limited to 75% in-person, but a Facebook live stream will be provided through the First Assembly of God Carlsbad website.

Robert was born August 31, 1955 in Carlsbad, NM to Billy and Bernice Rhoades. He went on his first date with Pam (Trafton) to the CHS Homecoming bonfire in 1971, and married her on August 25, 1972. They had three children together, James, Crystal, and Daniel. Robert and Pam were inseparable in life, and celebrated 48 years of marriage together this past August.
Robert worked with his father and brother at SEMCO for several years before starting what would become a lifelong career at the Waste Isolation Pilot Plant (WIPP) in 1983. He was a part of the Mine Rescue teams for 20 years, and together they brought home multiple National Championships. During his time at WIPP, he created a special bond with so many, and he cherished every one of those friendships. He was planning on retiring to his dream home in Granbury, TX this year with Pam, where they could fish and enjoy sunsets together to their hearts’ content. Robert lived for the outdoors, and spent every spare moment he had fishing or hunting with his family and friends. He was in awe of God’s creation, and was involved in several projects and clubs in town that were focused on fishing and hunting conservation. He loved Jesus, and his church was the outdoors, where he could just spend time with and talk to God. He took pride in helping others learn how to both enjoy and be responsible in the outdoors, especially his grandchildren, who all adored hunting and fishing with their Papa. His greatest joy was being surrounded by his children and grandchildren on the back porch, dancing and laughing together. Every day, as soon as he got home from work, he went straight to the back porch, put on some music, and enjoyed a good cigar. He genuinely loved others and lived life to the fullest, and was the best example of how to make the most of and enjoy every moment. He leaves behind a wonderful legacy.
Robert was preceded in death by his parents; sister, Louise Marie; nephew, Billy Shawn; brother, Ronnie; grandmother, Marie Loftis; lifelong friend, Brent Eastman; brother-in-law, Gene Pruitt; father-in-law, Berl Trafton; granddaughter, Juniper Lilly; and his fur girls Glory, Joy, Lady, and Tess.
He is survived by his wife, Pam Rhoades; his children, James Rhoades (Wendy), Crystal Rhoades, and Daniel (Jamie) Rhoades; sisters, Joyce Pruitt, Jennette (Greg) Schoenherr, and Kathy Hernandez; grandchildren, Julianne Rhoades, Bryson Ballew, Weston Rhoades, Jenna Rhoades, and Ender Rhoades; and several in-laws, aunts, uncles, nieces, nephews, and cousins.
The family would like to thank his primary care provider, Reagan Leyva, FNP, as well as Dr. Ali, Dr. Athigaman, and the Lakeview Hospice nurses & staff, for the loving care you provided to him and us during the last several months, we are so grateful to all of you.
Honorary pallbearers are David Rhoades, Steve Childress, Carl Melton, Jimmy Flora, Dane Wilson, Aaron Curbello, and Mike Lancaster.
Robert had a huge heart and loved to give to others, so if you would like to give in honor of him, please do so to the charity that is dear to your heart.

To order memorial trees or send flowers to the family in memory of Robert Rhoades, please visit our flower store.