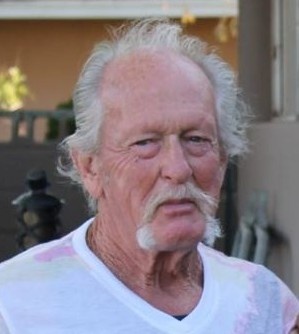 On the morning of July 5, 2021, Robert Wade Hutchins, age 80, of Country Club Circle, fulfilled the words of the Apostle Paul from 2nd Timothy 4who said, “As for me, I am already being poured out as a libation, and the time of my departure has come. I have fought the good fight, I have finished the race, I have kept the faith. From now on there is reserved for me the crown of righteousness, which the Lord, the righteous judge, will give me on that day, and not only to me but also to all who have longed for his appearing.” God has released him of the strain of a prolonged illness into the healing of the resurrection!

A celebration of Robert’s life will be held on Saturday, July 24, 2021, at 10:00 AM with an informal gathering at the base of the Ocotillo Trail, officiated by the Rev. David Wilson Rogers of Carlsbad’s First Christian Church (Disciples of Christ). Denton Wood Funeral Home is in charge of Arrangements. There will be no visitation and Cremation has taken place.
Robert was born on December 12, 1940, to Thomas Wade Hutchins and Allie Mae (Barber) Hutchins in Carlsbad, New Mexico. He grew up in Carlsbad and loved to call this community his home.

As a young adult, Robert worked as a painter and then as a miner in the Potash Industry where he proudly represented the interests of his coworkers as the Union Arbitrator. After 10 years at IMC Potash, which included some of the most contentious labor disputes in Carlsbad history, Robert traveled the region with his wife and did contract painting in Utah, Arizona, and across New Mexico, before moving to San Diego, California, where he spent the next 12 years of his life in the Southwest Marine Shipyard painting ships. Much of his work was in service of the US Navy working on Destroyers and Carriers. He later returned to his hometown to continue his love of painting in a long, and much-loved retirement. Although retired, Robert worked extensively with his son, Robbie, to establish and assist in Watchdog Painting. Among his notable commercial projects were the BNSF Train Station and the Guard Shack at the WIPP site, not to mention countless private homes and small businesses that still show the craftsmanship and professionalism of his quality painting skills. He also worked for Hutchins Electric answering phones and keeping the books with his son, John. In his retirement he also worked extenially with Carlsbad Main Street and the Farmer’s Market.

Along with his noteworthy professional career as a painter and Union official, Robert was passionate for progressive politics and advancing justice, equity, and peace on local and national levels. Robert enjoyed walking the streets, knocking on doors, attending political rallies, and defending the causes of the Democratic Party. He was an official in the local Democratic Party for many years and instrumental in advocating for many patriotic causes. To his absolute joy, Robert was very involved in, and dedicated to, the two electoral victories of President Obama.

When not engaged in politics, Robert was dedicated to the outdoors. An avid gardener, hiker, walker, pickleball player, and kayaker, Robert was always active and outside. His daily passion was walking the Ocotillo Trail on C-Hill, and made his last of several treks up to Guadalupe Peak at the age of 75—an adventure that inspired many others to clime the peak! He also loved the indoor sport of bowling and even took the trophy at a CARC, Inc. Bowling tournament. Robert, also enjoyed visiting with his neighbors.

A life-long Christian, Robert was active at First Christian Church (Disciples of Christ) where he served as a Deacon, regularly attended Bible Study, Worship, and Contemplative Prayer, as well as participated in just about every ministry outreach in which the Church was a part. These included Jonah’s House, United Way’s Stuff the Bus, Relay for Life, Packs for Hunger, CROP Walk, Neighborhood Night Out, and rallies for faith causes, including Immigrant Rights, civil justice, and Peace.

Robert was the last of 10 siblings and is preceded in death by all siblings to include his parents, his daughter Teresa Garrett, his son, Tony Wade Hutchins, and grandson, Stormy Rea Hutchins.

He will be long remembered as a man who was willing to fight the good fight for those without a voice and understood his passionate call for justice as the righteous fulfillment of his faith in Jesus Christ. Memorial contributions may be made to the First Christian Church (Disciples of Christ) or to the charity of one’s choosing.

To order memorial trees or send flowers to the family in memory of Robert Wade Hutchins, please visit our flower store.
Send a Sympathy Card

Meet at the base of the trail. In the college parking lot.