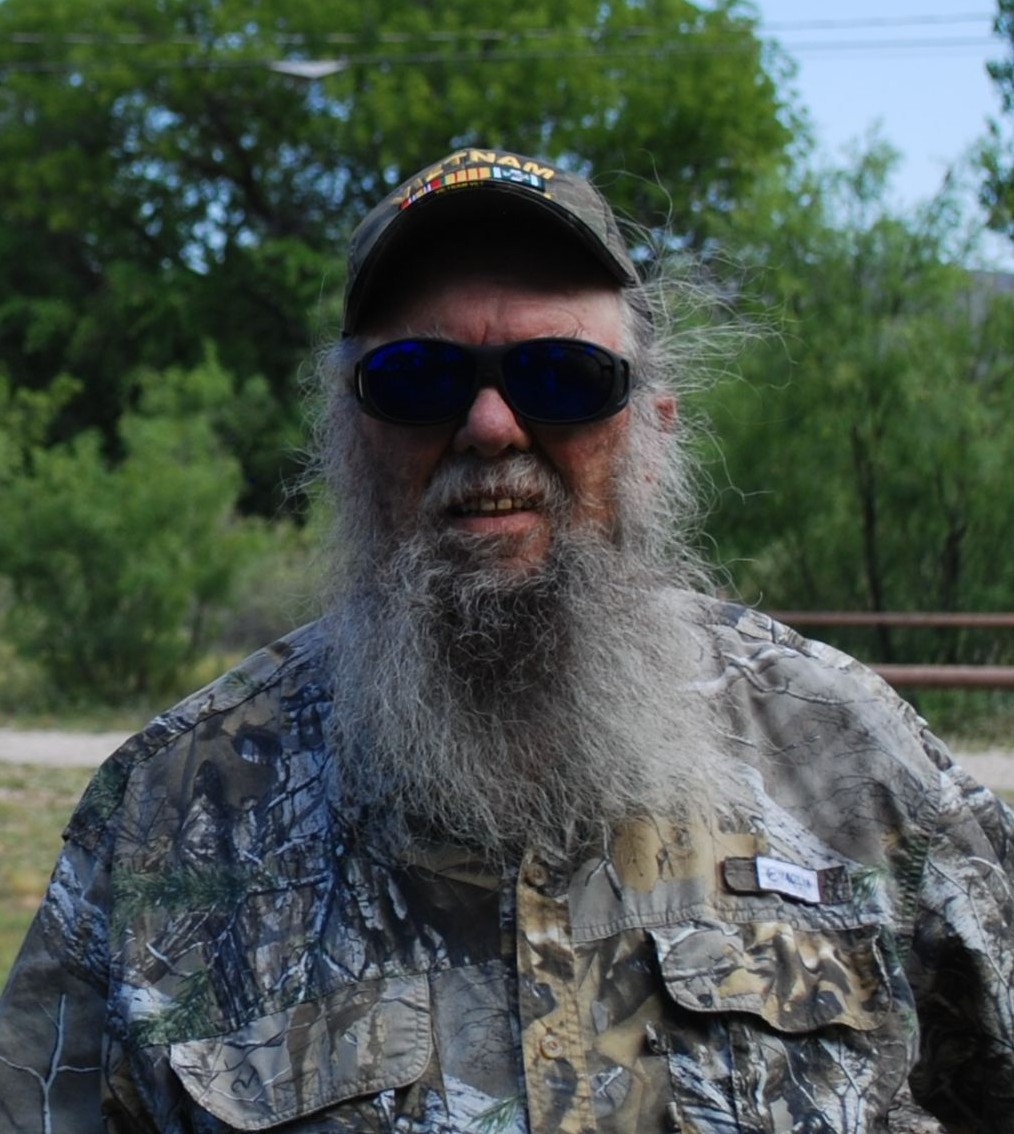 He had gone on many road trips—visiting national parks and out of the way lakes, dropping in on family and friends, and going on hunting, fishing, and experiencing history trips. He preferred being in the driver’s seat listening to Billy Joe Shaver or the Pogues while imagining the countryside at a different time and place, usually 1800’s when the population was Native American, which he read about extensively.

His earliest road trips involved sports with his Dad driving to games all over New Mexico and Texas. He graduated from Jal High School in 1969, and soon after gave up the driver’s seat for a seat on a transport plane to Vietnam. He served honorably in the army there from 1970-1972. Like most young soldiers of the era, he came back profoundly changed, but he knew getting healthy involved more road trips. He traveled to Arizona with his buddy Carl Roberts and worked on a farm during the day and raised some spirits at night. Then he felt the mountains calling him, so he packed up and moved to Rifle, Colorado, a town of colorful characters where he misfit in just right. He fulfilled his romance with the west by herding sheep on horseback where nature’s beauty and isolation helped him heal.

He only left the high country when his friend Gary “Fatboy” Milton introduced him to a cornfed Iowa chick. A few years later after marrying Judy Goedken in 1978, they brought their daughter Tylia home to a sheep ranch he managed near Meeker, Colorado. Later he worked in construction and in the oilfield there, before making the decision to come home to Jal in 1983. He hired on with Oxy (Occidental Oil Company) and worked there until he retired in 2013.

Remarkably, this man who had chosen to retreat from what he called “civilization” in Colorado became involved in many roles in his hometown. He coached girls’ softball when his daughter was interested, and then coached a boys’ Babe Ruth team. He served on the Jal School Board for sixteen years, which led to his involvement with the New Mexico State School Board Association where he served a term as president. It was his voice people heard over the loudspeaker at Jal High School football games for years where he was known for his colorful, quirky commentary. He even emceed many civic events. He was generous with his time, energy, and sense of humor.

In 2006 he was transferred to Carlsbad as a safety technician where he worked until his retirement in 2013. He knew he couldn’t just stay at home no matter how comfortable his easy chair was, so he performed safety teaching duties for his friend Dee Branin from 2014 until just recently. But his old love of ranching called to him, so he did a little feeding and watering for Winston Ballard with the stipulation that he didn’t have to break a sweat and could take road trips whenever he wanted. The fine people at United Well Service gave him an office and a place to go and do his “barely working but still needs an office” act.

Comforted by his memories and stories are his wife Judy, his daughter Tylia (Chris) Gardner and granddaughter Loralei from Livermore, California. Three brothers-in-law survive him -- Steve (Debbie) Goedken of Dubuque, Iowa; Merlin White of Worthington, Iowa; and David Lovett of Melbourne, Australia and three sisters-in-law Mary Kearney of Berry, Australia, Linda Goedken of Monticello, Iowa; and Claudette Kerby of Eminence, Kentucky, as well as his brother’s sons Kelly (Stacy) Kerby of Austin, Texas and Michael (Bob) Kerby of Reston, Virginia. Cousins, nieces, nephews, and great nieces and nephews all had a place in his heart. One cousin in particular, Don Rheay of Las Cruces, New Mexico was his little brother. He also took special people in to be his found family including Miros (Daniel) Villalobos of Chihuahua, Mexico; Carolina Contraras Armendariz of Camargo, Mexico; Franco (Daniel) Contreras Armendariz of Mexico City; Sonny (Amber) Xiao of Toronto, Canada: Fabiola Armendariz Solis of Camargo, Mexico; Tim Conway of Casper, Wyoming; and Steven (Leah) Conway of Jal, New Mexico.

A memorial service will be held at Denton-Wood Funeral Home on June 6th at 1:30 PM. Friends and family will also gather together on July 10th close to his birthday to celebrate a life well-lived.

He would prefer donations to any charity rather than flowers. One of his favorite places was the George-Mark Children’s House in San Leandro, California. It is a palliative care home for children and their families.

To order memorial trees or send flowers to the family in memory of Rick L. "Herder" Kerby, please visit our flower store.
Send a Sympathy Card