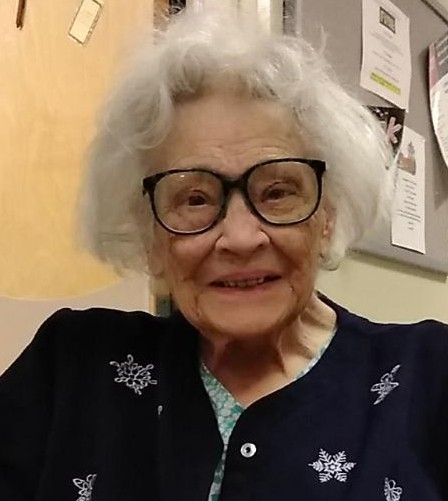 Mildred was born to Clark and Creola (Torbet) Streitmatter near Princeville, Illinois, on April 24, 1923. She was the eldest daughter of Clark and Creola’s six children.

In 1941, she graduated from Wyoming High School in Illinois. She attended nursing school at Methodist Hospital in Peoria, Illinois, and graduated in 1948 as a registered nurse. In 1971, she received her BS in Nursing from the College of the Southwest in Hobbs, NM.

She married Vernon Campbell on August 17, 1952, in Hopedale, Illinois.

Mildred and Vernon moved to Carlsbad, NM, in early 1953, and she has been a resident since that time. She was a member of First United Methodist Church. She was active in the Women’s Society of Christian Service and United Methodist Women. She joyfully sang in the Chancel choir, with the ladies’ group known as the Psalms, and the praise choir. Mildred taught two-year-olds in Sunday School for 27 years, played in the handbell choir, and did all kinds of volunteer jobs at the church. She received awards such as the Citizen of the Year, and the AJ Crawford Special Recognition award in 1998, recognizing her for her acts of kindness.

Mildred’s nursing career was a HUGE part of her life. Her first nursing job in Carlsbad, NM, was at the Carlsbad Hospital when it was located at the corner of Fox and Halagueno streets. She took time off from nursing when her children were small, and during that time she ran the Gingerbread Nursery from her home. She returned to work after both kids were in school. She worked as the recovery room nurse at Memorial Hospital. She then worked at Saint Francis Hospital, later known as Carlsbad Regional Medical Center. Mildred worked at Lakeview Christian Home for a period of time before working at the final hospital of her nursing career, Guadalupe Medical Center. She retired from active nursing after 49 years, but continued to help others.

Mildred was lovingly referred to as Sis, Aunt Sis, or Milly by her family; and later as Missy by her friends. She loved baking pies for the auxiliary ladies at the hospital, and always enjoyed a good meal with family or friends. She traveled back to Illinois as many years as possible to attend her family reunions each summer. Her extensive collection kept the memories alive of many of those who had passed on.

She was preceded in death by her father in 1941, her mother in 1985, her husband Vernon in 1989, her sister Marcella Surritte in 2009, and brother Merle Streitmatter in 2014.
She is survived by: son Michael J Campbell of Largo, Florida; daughter Laura F Campbell Loos and husband Bill Loos of Las Cruces, NM; her only grandchild Rebecca J Loos Percoco and husband Dominick of Fort Davis, Texas. Also surviving are: her sisters Lucy Meaker of Kewanee, IL; Alice Cleer of Pekin, IL; and Kay Geer Weaver of Clinton, Arkansas. She leaves behind a multitude of nieces and nephews, and extended family members from the community.

Cremation has taken place, and there will be no visitation. A memorial service will be held at a later date, and will be announced when service information has been finalized. Denton-Wood Funeral Home is in charge of arrangements.

Memorial contributions may be made to the Carlsbad Foundation by clicking on the following link: https://carlsbad.fcsuite.com/erp/donate

To order memorial trees or send flowers to the family in memory of Mildred Campbell, please visit our flower store.
Send a Sympathy Card