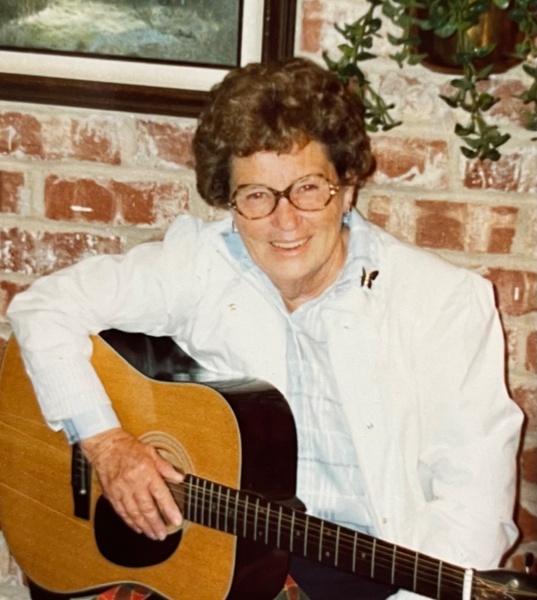 Martha W. Skeen, 97, of Carlsbad, New Mexico passed away on Friday, February 11, 2022, at her home surrounded by family. Martha was born on February 2, 1925, to Francis and Hester Woolley at home in Benson County, ND.

There will be no visitation, and a Celebration of Life service is scheduled for 2:00 PM Tuesday, February 15, 2022, at First Baptist Church with Pastor Jimmy Ryan officiating. Following, interment will take place at the Carlsbad Cemetery in Carlsbad, NM. Denton-Wood Funeral Home is in charge of making arrangements.

After high school, Martha moved to Great Falls, MT and worked in a bank there.  She met the love of her life, Kelly Skeen at a USO dance in Great Falls, MT during WWII. They were married on October 8, 1944.  After Kelly was released from the service, they moved back to Carlsbad in 1945, and started their family of four children. They went into business with Kelly’s parents at Skeen Furniture store. Eventually they bought land in the Otis area and began farming.  After Kelly’s passing in 1981, Martha continued operating Skeen Furniture, farming and started ranching. Martha was also a lover of music, and skillfully played the piano for many years. She also shared her talent with several churches in the area, by playing during their worship services.

The family would like to give a special thanks to Martha four care givers: Monica, Laraine, Ashley, and Janet. And to the Lakeview Hospice staff. In Lieu of flowers, the family has asked that memorial contribution be made out to Mission New Mexico: Online Giving .

Condolences may be given online at dentonwood.com

Martha Woolley Skeen was born at home on the farm in Benson County, ND on Feb. 2, 1925 to Hester Mary Susan Simon and Frances Miles Woolley, the youngest of seven children.  After graduating from Fort Totten, ND high school she moved to Great Falls, Montana where she attended business school and worked at a bank.  She met Kelly Skeen at a USO dance during WWII and they were married on Oct. 8, 1944.

After Kelly was released from the service they moved to Carlsbad and went into business with Kelly’s parents, buying into Skeen Furniture Co.

They started a family in 1947 with Linda then Curtis, Sharon, and Charles. They were active members of First Baptist Church where Martha taught five year old Sunday School for many years and sang in the choir.

She loved music and when Linda and Sharon started taking piano lessons she also began lessons.  She especially liked southern gospel music and could play well by ear.  Over the years she played at several local churches: Otis Baptist, Loving Baptist, and Cavern Baptist.  She loved playing with other musicians in a band and was in several different groups.

In 1960 she and Kelly bought a farm in Otis and moved their growing family to the country.  They added on to a small existing house which she lived in until her death.  While Kelly was busy with Skeen Furniture she returned to her roots as a farmer.  There was a milk cow, chickens, horses and some sheep for a while. The farm produced alfalfa hay and cotton.  When needed she would purchase a newborn calf from a local dairy.  Since she didn’t have a truck she would put newspaper all over the back seat and had the kids hold the calf all the way home.

Of course, there were the inevitable ‘accidents’.

During the summer she was in charge of rounding up the four kids and going out to chop cotton.  These were the days before Treflan and Roundup! Lots of weeds!  Needless to say, the kids weren’t pleased.  They were paid the princely sum of 60 cents an hour which their father had them put into a savings account.

She also was the family vet and could tend to the various ailments of the growing group of animals.  She didn’t mind the cows but as she said, was tired of being a mid-wife to sheep.  One day she put a newborn lamb on a towel-covered cookie sheet in a warm oven to revive him. Not surprisingly the sheep were soon sold.

Martha was a talented seamstress who made most of the girls’ clothes.  She also was a fair mechanic, skills she learned by helping her father in his shop working on farm equipment. Of course, there was a lot of cooking to do with a large family and they always looked forward to her fried chicken, gravy, and mashed potatoes.  In the summer there was a large garden to weed, harvest and put up.  She taught the girls how to can and make preserves, skills she learned from her mother.

After the kids were grown and Kelly expanded the furniture store she went to work there and kept the store books.  She was an excellent bookkeeper and was known to spend most of a day looking for a missing penny.  At that time, they acquired more farm land and she decided to buy a windrower to cut their own hay.  Kelly used to say that if anything ever happened to her, he would have to hire a cook, housekeeper, mechanic, bookkeeper, tractor driver, and a night irrigator to replace her.

After the sudden passing of Kelly in 1981, she continued their various business interests and over the years added more land to her growing farming operation.  A few years after his death she purchased a ranch in the Brokeoff Mountains and became a rancher.  In ranching she found her true calling.  She built an impressive herd of Brangus Cattle over the years and eventually bought the Delaware Ranch to expand her operation.  She loved her cows and liked to take hay bales to them.  They came to know her truck and would come when she honked.  That gave her an opportunity to observe them and evaluate their condition.

She was always on the lookout for promising business opportunities and when the Loving Cotton Gin came up for sale she put in a modest bid. To her surprise she was the only bidder.  When people asked Nathan why she bought the gin his reply was, ‘It was something she didn’t have!’.

Martha quietly left her imprint wherever she was…whether with her children and grandchildren, her employees, the churches where she served, or any others she touched.  She leaves a legacy of hard work, kindness to others, and generosity.  She will be missed.

The family would like to give a special thanks to Martha’s four care givers: Monica, Laraine, Ashley, and Janet and to the Lakeview Hospice staff. They would also like to thank Charlie and Donna Jurva who helped with her care.

To order memorial trees or send flowers to the family in memory of Martha W. Skeen, please visit our flower store.
Send a Sympathy Card