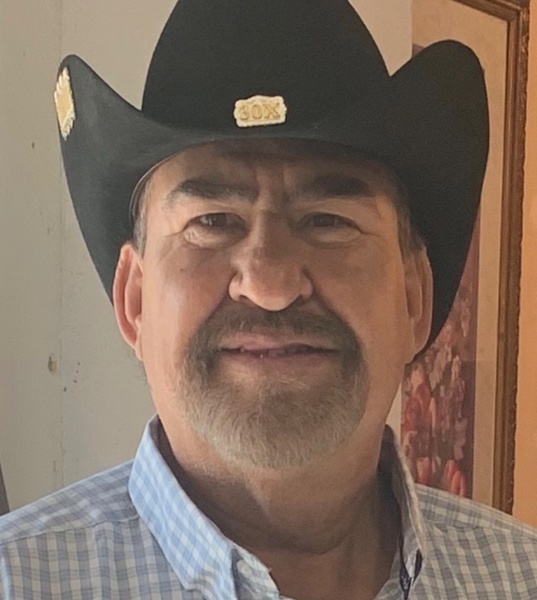 Juan “John” Sotelo Olivas, 62, of Wood Avenue, Carlsbad, NM, passed away unexpectedly Saturday, February 26, 2022, at Carlsbad Medical Center. Visitation is scheduled from 4:00 PM to 6:00 PM Monday, March 7, 2022, at Denton-Wood Funeral Home Chapel, followed by a Rosary and Vigil starting at 6:00 PM. A Mass of Christian burial is scheduled for 10:00 AM Tuesday, March 8, 2022, at San Jose Catholic Church with Fr. Juan Carlos Ramirez officiating. Interment will be at Carlsbad Cemetery in Carlsbad, NM. Denton-Wood Funeral Home is in charge of all arrangements.

He was born March 27, 1959 in Ojinaga, Chihuahua to Nerio and Cruz Olivas. The family moved to Carlsbad, New Mexico in 1971. Juan is defined as the musician, the blade man, and the guy anyone could count on. He would always lend a hand without caring if you could ever repay him; he just liked to make the lives of others a little easier. He lived his life full of all the things he was passionate about: his wife Lupe, his children, grandchildren, siblings, cousins, friends, work, and music.

Juan spent the last 31 years of his life with his ‘Mi Vida’, Lupe, or Lupita as he loved to call her. She was his Patrona and his reason for being who and where he was in life. Together they shared a very beautiful life full of love, serenatas, menudo Saturdays, and going for drives to the mountains or around the places he was working. If you knew Juan, there wasn’t anything he wouldn’t do for her. She was his life. He looked forward to the day they could retire in the house he always dreamed of building her. He was blessed with ten kids, many grandchildren, and several great grandchildren. With his grandkids Juan is “Pops”. He was always making sure the freezer was full of paletas and ice cream. He loved inviting everyone for his big breakfasts and then disappearing to take naps. We loved sitting outside or around the dining room table listening to all the crazy stories about his younger years. The kids loved going to Tita and Pops’ house and watching westerns on the couch with their Pops or reminding him he needed to go buy more paletas.

Juan had a great love for music. You would always find him listening to it, playing it, singing it, or drumming on the table or his legs. Growing up music was a constant in his childhood home. At the age of 20 he and his brothers, Hector, Robert, and Ralph, decided to form a band. Together they became Los Ilegales del Bravo. Playing the Bajo Sexto and singing with his brothers was truly something he was so proud of. Juan shared so many memories, so many miles on the road, and so many great moments, like being on the Jonny Canales Show, with the band. His love for his music is something that anyone could see, especially watching him dance and ‘rock out’ on his bajo sexto. He would sit in the house and play or tune his guitar, getting ready for practice or a show, for hours. Watching him play and sing was a beautiful thing, especially when he would bring out his bajo just to sing happy birthday. There is nothing more comforting than knowing he spent his last moments doing something he loved, making music in the studio with his brothers and friends. He was so excited about recording his final album and spent most of his days at home going over music and singing with his Lupita.

When it came to work, our Juan was best known as the “Blade Man.” In the early 1980s he got his first taste of running the Motor grader, ‘ la blade’. It did not take long before he found his passion. Anyone could see that Juan had a talent and a good eye for this machine. For those close to him, it was even easier to realize that he loved operating it as well. On November 24th of 1992 Juan became an employee at Constructors Inc., where he proudly worked for 30 years until the day he passed. Constructors quickly became a second family; coworkers became like brothers and sisters. After more than 30 years of operating ‘la blade’ he continued to prove exactly why he was the GOAT. He was a master at his trade and his willingness to teach others made him a great mentor and leader. Juan was grateful for his place within Constructors and even more for his lifelong friendship with David Shoup. He always mentioned how thankful he was for everything David had done for him and his family. He had so much pride in his work that he loved showing his family all the places he laid pads, parking lots, andall the roads he paved. He really did love his job and the work he did; I guess you could say so much so that he never really worked a day in his life.

When he wasn’t working or playing music, he enjoyed spending time with those he loved. Juan enjoyed many cookouts with his Constructors’ crew, his family, and friends. Juan felt honored to be loved and cared for by those around him. He genuinely felt he must have done something special in his life “que lo hacian sentir como un rey.”

His presence, his smile, and his “and then?” will be dearly missed. We are forever grateful to have been able to have him in our lives, to feel his love, to experience his kindness, and to be able to say he was our Vida, our Dad, and our Pops. Gracias por tanto amor. We love you Juanito.

To order memorial trees or send flowers to the family in memory of Juan “John” Sotelo Olivas, please visit our flower store.