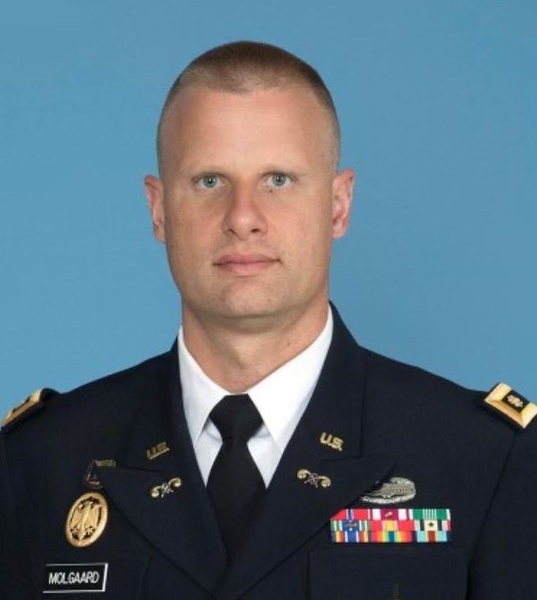 Brookeville, Maryland - U. S. Army Major Joshua James Molgaard passed away on October 11, 2021, at the Brooke Army Medical Center in San Antonio, Texas. Major Molgaard was born on September 2, 1980, to Brad and Therese Molgaard in Kenosha, Wisconsin. Josh grew up in Carlsbad, New Mexico and graduated from his family’s home school in 1999. In 2007 he married Allison Short in Greenville, South Carolina. They have two boys, Austin, 11, and Dillion, 8.

Major Molgaard was commissioned in the U. S. Army as a 2nd Lieutenant in 2006 and served in distinguished fashion. In 2007, he deployed in support of Operation Iraqi Freedom where he served as a Platoon Leader and Executive Officer until 2008. He commanded Delta Company, 3rd Battalion, 10th Infantry Regiment at Fort Leonard Wood, Missouri from 2011 to 2012. Major Molgaard then served as an instructor in the Department of Physics and Nuclear Engineering at the United States Military Academy, West Point, New York from 2014 to 2017. Following West Point, Major Molgaard served as a researcher in the area of assessments and radiation injury at the Armed Forces Radiobiology Research Institute from 2017 to 2020. Major Molgaard’s final assignment was with the Defense Threat Reduction Agency in 2020.

Josh enjoyed fishing, camping, hiking, and football. He was a passionate fan of the Clemson Tigers and the Green Bay Packers. Josh was also an amazingly gifted musician, singer, and songwriter. Despite all his talents, Josh will be best remembered for his love of God, Country, and Family. As a member of the Olney Baptist Church near their home in Maryland, he served as a deacon and worship leader. As a husband and father, Josh made his wife and two boys the greatest priority of his life. He will forever be remembered for his unselfish and loving ways. He was a true servant of God and the United States of America.

Josh is survived by his wife and children, his parents, his brother Justin (Chelsey) Molgaard of King George, Virginia, and his grandparents, Jim and Bea Foucault. He is also survived by many nieces, nephews, aunts, uncles, and cousins. He was preceded in death by his paternal grandfather, Paul Molgaard, and his maternal grandparents, Ray and Eldora Fliess.

In lieu of flowers, the family is asking for donations to Operation Heal Our Patriots, Samaritan’s Purse, PO Box 3000, Boone, NC 28607 or Compassion International, https://www.compassion.com/donate.htm.

To order memorial trees or send flowers to the family in memory of Joshua James Molgaard, please visit our flower store.