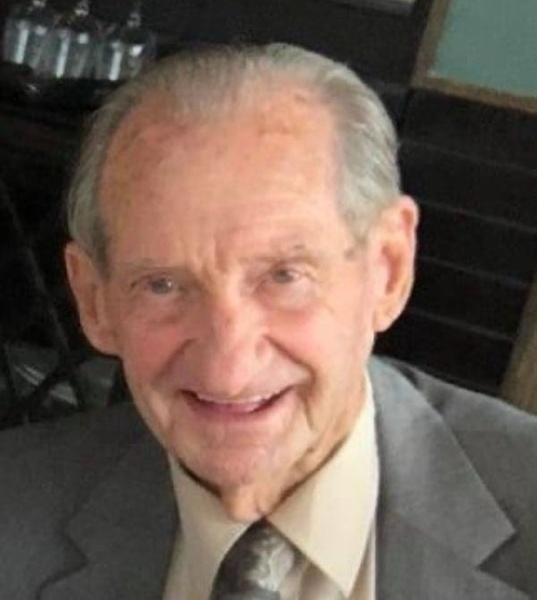 Fox and Lake Church of Christ

Jimmie R. Garner, 86, passed away peacefully on August 9, 2021 after a brief battle with covid complications. He was surrounded by family and friends. The love of his life, Carolyn Garner, preceded him in death four days earlier. The family has found comfort and joy knowing that they are together again. He was born on August 16, 1934 in Calico Rock, Arkansas and moved to Carlsbad during his high school years. His only time living away from Carlsbad was during his service in the US Navy and his college years.

Jim was the middle child, born to Eldon and Eva Garner in Calico Rock, Arkansas and spent a majority of his younger years there. He played both basketball and baseball while in high school. He graduated from Carlsbad High School in 1953 and attended NMSU- Carlsbad for two years while working at E. V. McCollum & Co. In 1955, he served in the U.S. Navy as a YNT 3rd Class Engineering Logroom Yeoman on the USS T. E. Chandler DD 717 located in the Pacific Ocean. Jim received an honorable discharge in September 1957 and he entered Harding College that fall in Searcy, Arkansas. He used his engineering coursework, management training and sales oriented seminars over several years to work as a surveyor, mining engineer, and supervisor for companies such as Texaco, Inc., IMC and Union Industrial Corporation.

At the encouragement of his wife, Carolyn, Jim returned to Harding College to complete the necessary hours for his B. A. in Business. Additionally, he received his pilot license, both private & commercial, used mainly for business opportunities. In the early 70s Jim became part owner of Carlsbad Block & Supply acquiring full ownership shortly thereafter, where he continued to run the business into his later years of life.

While Jim’s business accomplishments are amazing, his relationships with others were extremely important. These included business relationships, friendships with individuals in the many groups he was part of (such as the American Institute of Mining, Aircraft Owners & Pilots Association, the Carlsbad Rotary Club and the Breakfast Optimist Club of East Fort Worth) and the “too many to count” lifetime friendships. Jim loved his Carlsbad community, pouring his service into being a Boy Scout Leader, a board member of Lakeview Christian Home, and contributing to many local fundraisers over the years. He was an active member of Fox & Lake church of Christ serving as a deacon, Bible class teacher & elder. His most cherished relationships he fostered were those with his immediate family members, and his wife of 59 years, Carolyn S. Garner.

Jim’s hobbies during his lifetime included raising horses, working in his pecan orchard, hunting and skiing - both snow & water, which he continued to do well up into his late 60s. He loved a good, clean joke, telling stories to anyone that would keep listening and a numerous number of 42 parties. He was never without a word of encouragement, a Biblical principle applicable at just the right moment and everything reminded him of a song - which he would then sing. Jim had a benevolent heart and brought laughter to every situation.

Jim was preceded in death by his parents, Eldon & Eva Garner; his brother, Wandel Garner; his sister, Ella Dean Shoemate; and his wife, Carolyn Garner.

The family wishes to express their deep and sincere gratitude to the extended family members, friends, church family and community. Your condolences are appreciated by the family. In lieu of flowers, memorial contributions may be made to Lakeview Christian Home via their website: https://www.lakeviewchristian.com/charitable-giving.

To order memorial trees or send flowers to the family in memory of Jimmie R. Garner, please visit our flower store.
Send a Sympathy Card

Fox and Lake Church of Christ