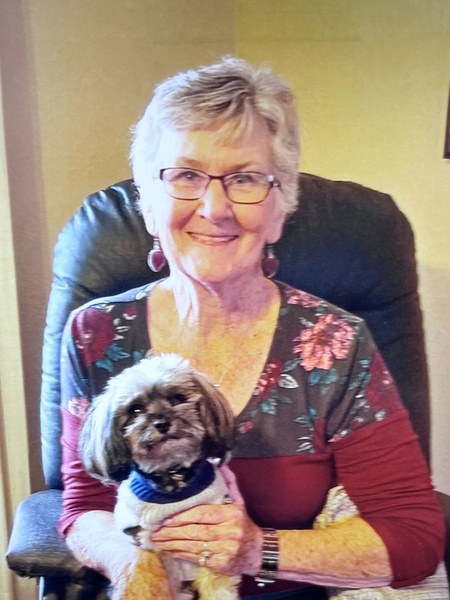 Jackie McGarry Parker 76, of Carlsbad NM passed away Thursday July 8, 2021, after a long and courageous battle with cancer at home with her daughters by her side.

Cremation has taken place, there will be no visitation. Memorial services is scheduled for 10:00 AM Saturday, July 10, 2021, at Denton-Wood Funeral Home.

Jackie McGarry Parker was born August 21, 1944, the third child of Pauline and Jack McGarry. She lived in a small house at Lakeview Hotel and Courts which was owned by her Grandfather Henry S. McGarry. In her youth, Jackie moved several times but always considered Carlsbad home. Jackie attended college and worked at IMC Potash mine where she met Tom Parker. The 2 were married November 24, 1966. While married they lived in many different places. During this time Jackie finished her Bachelor’s of Science in Education from Western Montana College in Dillon, Montana. Jackie always said the greatest joy of my life was raising my three children Allison Hervol, Andrew Parker, and Elizabeth Hamill. During her marriage Jackie was a very involved stay at home mother, leader of boy scouts, President of PTA and endless duties of motherhood. After her divorce in 1987, Jackie moved home to Carlsbad and began her teaching career with Carlsbad Municipal schools in January 1988. Jackie was a lifelong teacher and enjoyed her time in the classroom teaching grades Kindergarten through 2nd grade. Jackie retired in May of 2006 after 18years with the district. Jackie lived life to the fullest. She enjoyed traveling around the world with family and her dearest friend Linda Dunagan. In retirement she was a Country Gold Line Dancer, Director of the Bridge Club, and most of all Grammy extraordinaire. Jackie leaves behind a large family and many friends who loved her dearly and learned through her to treasure your family more than anything.

She is preceded in death by her parents, brother-in-law, Jim Neatherlin, and oldest sister, Lavonne Neatherlin.

In lieu of flowers, the family asks that memorial contributions may be made to the Carlsbad Community Foundation, Carlsbad Contract Bridge League Scholarship Fund, 114 S. Canyon Street, Carlsbad, NM 88220

To order memorial trees or send flowers to the family in memory of Jackie McGarry Parker, please visit our flower store.