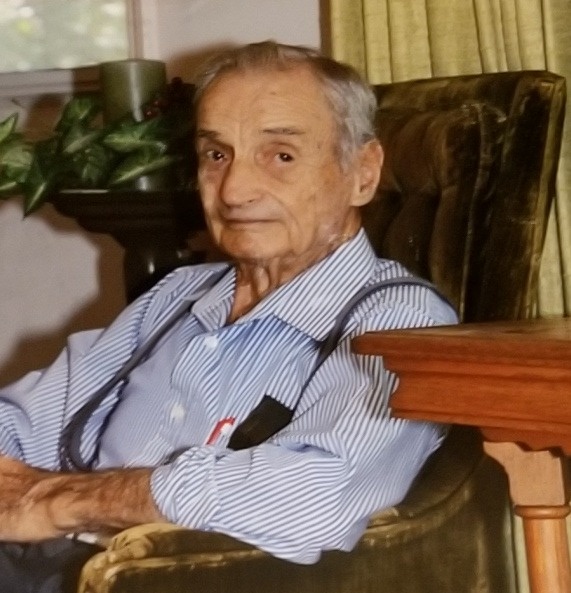 Leon graduated in 1942 from Hope High School, Hope, Arkansas. After graduating, he held various jobs in and around Hope including Proof Technician at the Southwestern Proving Grounds.

In May 1945, Leon married the love of his life, Nancy Ann Hamilton in Hempstead County, Arkansas.  Shortly after getting married, he was called to the US Army to do his part in WWII.  After completing basic training, he was assigned to Hamilton Field, California, where he was to wait to be shipped overseas to assist in the war. However, prior to being shipped out, the war ended. Along with hundreds of other soldiers, he received an Honorable Discharge and went back to Hope.

Leon and his wife, Ann moved to Carlsbad, NM in 1947 where he began working as a dock loader for Potash Company of America in January, 1948.  Leon worked for PCA in various positions including Face Boss until he retired after 39 years in 1968.

Leon and Ann spent many years RVing. They traveled from coast to coast as they took their two sons on several vacations over summer breaks and spent many summers camping in Texas and New Mexico after their sons graduated high school and moved away.

Leon had many hobbies and was always busy building something.  He built additions to his and Ann’s home.  He kept an immaculate lawn and won City awards for the most beautiful yard for his landscaping abilities.  He also loved animals, no matter what it was.  Over the years he nurtured many, such as peacocks, racoons, chickens and opossum.  He was an avid bee keeper and loved to fish as well.

Leon was preceded in death by his parents; two sisters and his wife, Ann, of 74 years.  He is survived by two sons: Dwayne (Sandy) of Scottsdale, AZ and Allan (Marie) of Artesia, NM; three grandchildren; seven great-grandchildren and one great-great-grandchild due later this month.

Graveside services will be held at Carlsbad Cemetery, 10:00 AM, Tuesday, July 12, 2022.  Denton-Wood Funeral Home is in charge of the arrangements.

To order memorial trees or send flowers to the family in memory of Deward Leon Collier, please visit our flower store.