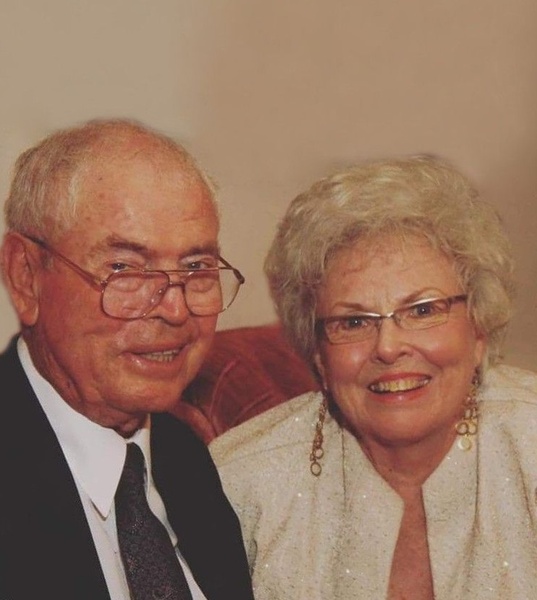 Delores P. Hendley was born to Henry B. Pannell and Susan Rebecca Ann Shields on April 2, 1931. She passed away peacefully surrounded by family on Tuesday, September 28, 2021. When she was only four years old, her father passed away and she, her mom and sister eventually went to live with relatives. Losing her father at such a young age had an impact on Dodie. Her mother had to survive without her husband and Dodie quickly learned the value of hard work independence and the importance of family.

In the late 1930s she and her mother would spend summers in Yellowstone where her aunt and uncle owned and rented a few small cabins. Her uncle also served as a tour guide in Yellowstone National Park. Always the florist, she would pick wild flowers and sell them to the tourists to earn a little money. She also loved to dig in the dirt in the back yard to find all different kinds of colorful sediments due to the volcanic activity in Yellowstone. She would add the various colors of sediments in layers in jars to create beautiful designs.

In 1943, Dodie and her mom moved to Salt Lake City to live with her older sister who had married a man from there. Her sister’s husband was away serving in the Navy during World War II and her mom and sister worked at the Base Exchange. She often spoke fondly of her time in Salt Lake City. One of her favorite things to do was to go to the Great Salt Lake to float in the water.

Towards the end of the war she and her mom moved to Carlsbad. When she was 14, she went door to door at businesses asking for work. She knocked on the door of Carlsbad Floral and Mrs. Bingham hired her on the spot. That began a lifelong love for flowers and plants. Of course, Dodie worked at the flower shop for the money but she mainly did it to make beautiful arrangements that blessed the life of the recipient. Her whole life, her home was adorned by various plants and floral arrangements. They served as an outward expression of the beautiful person she always was on the inside.

One evening not long after moving to Carlsbad, she and some friends came upon a car crash and stopped to watch the activity. There were other teenagers observing what had happened. Unknown to her at that time, stopping at that car crash impacted her for the rest of her life. In the midst of that crowd that night, she met Jack Hendley, the love of her life. In time they became high school sweethearts.

After Jack left the Navy, they moved back to Carlsbad and Dodie worked for the Eddy County Clerk’s office. But for most of her life she worked at US Borax and IMCC where she made many friends.

Dodie was a lifelong member of the First Presbyterian Church in Carlsbad, NM. She sang in choir at the church and served in many capacities. She was one of the first female Elders at her church. She was active in the Sierra Blanca Presbytery and was a delegate in the Peace Movement. She had a sincere desire to do her part to achieve peace. When given the opportunity she spoke at various churches about the Peace Movement. She also traveled to Phoenix, New York and Indianapolis to spread peace.

Dodie loved music and encouraged her children to sing or play an instrument. She especially loved to listen to Chopin and Beethoven. In addition to music, Dodie had a passion for education. Even though she always worked full time she made time to take courses at NMSU-Carlsbad. Many a night she would review various works of art by Monet, Renoir, Rembrandt and others. Later in life, she took art lessons and eventually created art of her own. Finally, she also ensured that all 3 of her adult children achieved at least a bachelor’s degree.

Dodie and Jack were married 65 years and all of it was happy. Their home was filled with love and lots of laughter. They have 9 grandkids and 9 great grandkids and they all love to go to Mimi Do’s and Papa Jack’s house. They always had so much fun whether it was swimming at the Elks or playing games like Chickenfoot.

Dodie and Jack especially loved to dance. She would get all dolled up and off they would go to dance the night away in each other’s arms. Even at 90, her eyes would still sparkle when talking about dancing with Jack. We all know that they are now laughing and dancing in the presence of the Lord and their beloved daughters Denise and Lisa and many other loved ones in Heaven.

To order memorial trees or send flowers to the family in memory of Delores Pannell Hendley, please visit our flower store.