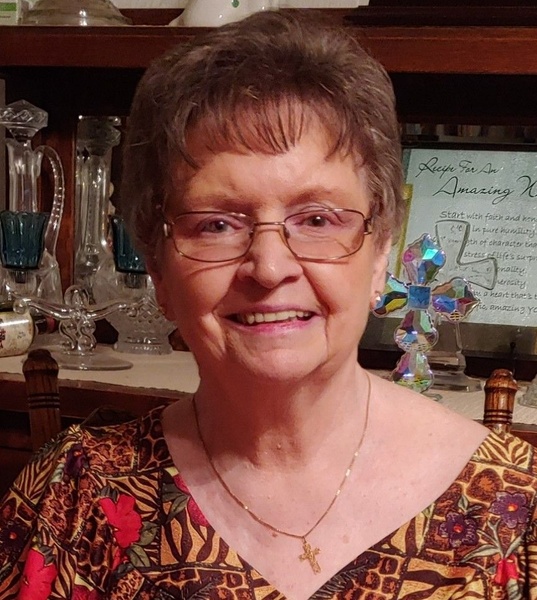 Charlotte Rae (Mayrhofen) Hjeltness, 77, of Carlsbad, NM, was called home to be with her Lord and Savior on Tuesday, April 19, 2022, in Las Cruces, NM.
Charlotte was born July 21, 1944, to Charlie V. Mayrhofen and Viola May Bennett in Carlsbad, where she lived most of her life. She attended Carlsbad High School and later became a licensed cosmetologist. She married her beloved husband, Darrel Hjeltness, of Carlsbad, in 1976. He survives.

Charlotte was a homemaker. She enthusiastically enjoyed crochet, quilting and other needlework. She previously served as president of the Zia Quilting and Stitchery Guild. She gave her handicrafts eagerly to friends and relatives and often had two baby blankets ready for any newborn who might be added to her circle. These gifts and her many letters to friends and family often were accompanied by small, handmade cards with her favorite Bible messages or words of encouragement. She gave out her cards at church services as well. A devout Christian, Charlotte received great comfort from her relationship with Jesus Christ. She was a member of New Beginnings Church of God in Carlsbad. She also volunteered her talents as a hairdresser for residents at Lakeview Christian Home. She was an avid reader.

Preceding Charlotte in death were her parents; two beloved brothers, Eddie Mayrhofen and Stan Mayrhofen; and her stepfather, Ted Bennett.

In addition to her loving husband Darrel, Charlotte is survived by her granddaughter, Sarah Murphy and her husband Brien of Las Cruces, New Mexico; stepdaughter and son-in-law, Krista and Paul Williams of Arvada, Colorado; stepson and daughter-in-law, Mark Hjeltness and Verena Paepcke-Hjeltness of Ames, Iowa; nephews Randy Mayrhofen, Scott Mayrhofen and Steve Mayrhofen; and nieces Shelly Johnson and Rebecca Mayrhofen.

In lieu of flowers, the family requests memorial donations in Charlotte’s name be made to the New Mexico Child First Network, P.O. Box 91702, Albuquerque, NM 87199. www.nmchildfirst.org

Graveside services begin at 10 a.m. May 7, 2022, at Carlsbad Cemetery, with Bishop Daniel Mullins officiating. No visitation is scheduled. Denton-Wood Funeral Home in Carlsbad is in charge of arrangements.

To order memorial trees or send flowers to the family in memory of Charlotte Rae (Mayrhofen) Hjeltness, please visit our flower store.