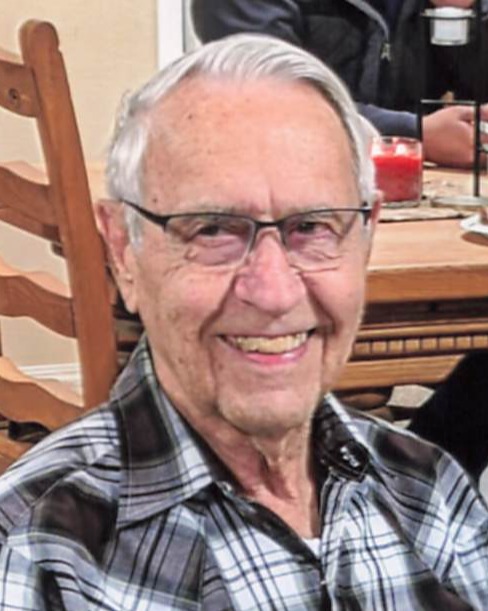 Bill Douglas, 90, of Walker Farm Road, Carlsbad, NM passed away peacefully with his daughter, Darlene by his side on Thursday, Dec 1, 2022. Private graveside services will be held on Tuesday, December 6, 2022 at Carlsbad Cemetery.

Bill Douglas was born on January 26, 1932 in Alton, MO to Clifton and Ida Douglas. He attended school in Thayer, MO, lettering in basketball and football, he was elected Homecoming King as a senior, he was also vice president of his senior class and voted most likely to succeed. After graduation in 1950, he joined the Army, was stationed in Fort Bliss, El Paso Tx and served as a Radar Tech and sharp shooter. He married Ethel Mae Backer in 1954 in El Paso Tx and started a family with the birth of their first daughter, Lynnette Douglas Walker in 1955 and second daughter Darlene Douglas in 1956. Bill and Ethel moved to California in 1962 where Bill worked as an Electrical Technician and returned to El Paso in 1967 to work for Fort Bliss Civil Services and then the Federal Aviation Administration. They transferred to Carlsbad in 1987 where he worked as an Electrical Technician for the FAA, Bill retired in 1994 as Chief of the Carlsbad Sector Field Office.

Bill was known by many as an "amazing man", "good man", "compassionate", "loving" and a "true gentleman with a great love for God". He loved his wife, daughters, grandchildren, great-grandchildren and great-great grandchildren unconditionally, his and Ethel's marriage was wonderful example to many young growing couples.

Bill was an avid bowler and received many trophies for his accomplishments, his other hobbies included shooting pool, playing softball for his church team and taking care of his great grand-children. Bill was a member of Church of Christ for the majority of his life serving as a Deacon for several different congregations.

Memorial contributions may be made to alzheimersassociation.org. Condolences may be expressed at dentonwood.com

To order memorial trees or send flowers to the family in memory of Bill Douglas, please visit our flower store.